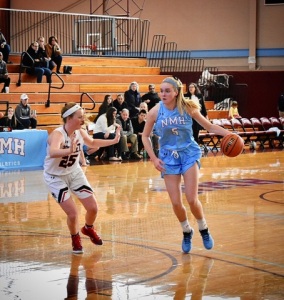 A huge junior year for a NMH squad working its way to the forefront in the NEPSAC only strengthened her mark as one of New England’s top talents in the 2019 class… earned All-NEPSAC honors in Class A, the league’s strongest class, and was named the NE 8 Most Outstanding Player after her squad won the league championship… selected to the all-tournament team at the Rivers Holiday Tournament… scored 20+ points on 10 occasions, including a 36 point outburst at the Say Yes to Success showcase against Blair Academy, and had several double-doubles… a highly coveted recruit in the 2019 class that received around ten Division 1 offers, she verbally committed to Penn (Ivy League) in April… 2nd year in EST.